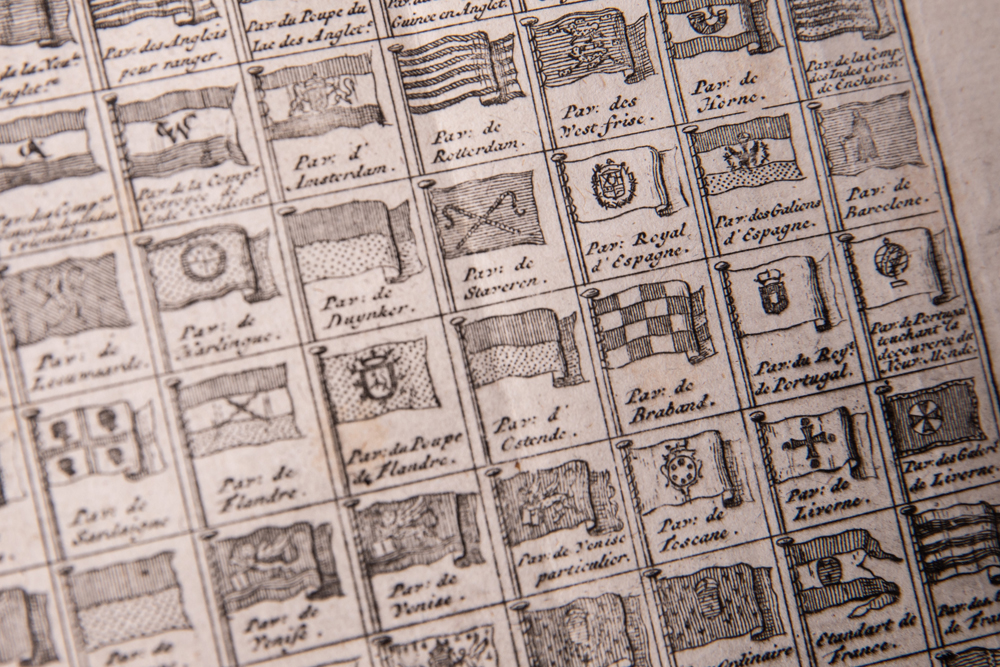 A company specialising in the registration of yachts and workboats simply has to have an early etching of maritime flags on its wall. Is it not?

There are a handful of early maritime flag etching examples known. Of which, this 18th-century Vlagge Des Werelts (Flags of the World) is one of the more petite and commonplace (read: affordable!) ones.

Flags of the world

This etching gives a unique look into the past. Although titled Nieuwe Tafel Van Alle Zee Varende Vlagge Des Werelts Op Nieuw Van Alle Voorgaande Fouten Gesuyvert (Table Showing the Sea Flags of All the Nations of the World, Corrected from All Previous Mistakes.), the flags depicted are hardly those of any flag states as we know them now.

Other than modern-day countries such as Great Britain, China, Malta, Turkey, Tunisia, Algeria, Mongolia, Kandy (Sri Lanka), and a few more, many other flags are either cities or regions. Notably, the flags of the Vatican, the Papal state, Batavia — and that of the Dutch West India Company, which in fact, was a company based in Amsterdam.

Particularly odd is the flag of China, which does not in any way resemble the flag used during the Qing Dynasty (Ch’ing) (1644-1912) — or the dynasties before that.

Father Andries was also an engraver and apprenticed with the cartographer and publisher Nicolaas Visscher II. He later managed Visscher’s shop after his death and then subsequently took over completely after Visscher’s widow’s death in 1726. Andries then established his own publishing house and bookstore, specialising in maps, plates, and plate books.

In 1728, his son Hendrik became a partner in the company. Note that young Hendrik was only a novice in the business at the time. Only recently, in 1725, had he published his first work featuring views of Amsterdam. In 1732/1733, his masterpiece Het Zegepralent Kennemerland arrived, containing 100 engravings — of which 99 were of his hand.

The book was written by Mattheus Brouërius van Nidek (1677- ca 1743) but appreciated for de Leth’s engravings above all else. It was supposedly published just after Andries had passed away in 1731, though the prints were completed before, in 1728.

A decade later, in 1740, his immensely popular Nieuwe Geographische Atlas en Historische Atlas Van de Zeven Vereengde Nederlandsche Provintien appeared for the first time. The copper plates were taken over by Jan Meyer — and later others — as the publication continued to be published for many years afterwards. After his father’s death, Hendrik took over the business until he died in 1766.

Hendrik de Leth was multitalented, in a way. In addition to being an engraver (etcher), he was an art dealer and broker, illustrator, and finally, an editor. It is, therefore, no surprise that he died a well-to-do man. Nor that many of his works lived on in both print and spirit.

First appearing in the Nieuwe Astronomische Geographische en Historische Zak en Reis Atlas by Jean Rousset de Missy (1686-1762) — a French Huegonaut writer and prolific journalist — this maritime etching is a glance into yesteryear. Supposedly, de Missy is potentially the flag engraver, as well. The first edition of it was purportedly published in 1740 in Amsterdam by Hendrik de Leth. The second edition was issued several years later, in 1766.

It’s difficult to determine whether this tangible example is a first or second edition. It might very well be possible that it’s an even later edition, as it was not uncommon for copper plates to be sold after the death of a cartographer or publisher. In this case, an S.J. Baalde took over the publishing of it from 1770 onward, after Hendrik had passed away.

The two accompanying tables below came with the etching and appeared in the same publication. The upper right corner of the second table is partially faded. It was not uncommon when a copper plate was used so often that a corner became distressed and ruptured after a while. This fault alone indicates that the etching is probably a later issue.

Due to the worn print or plate, this maritime flag etching is likely a 1766 edition — or even later.