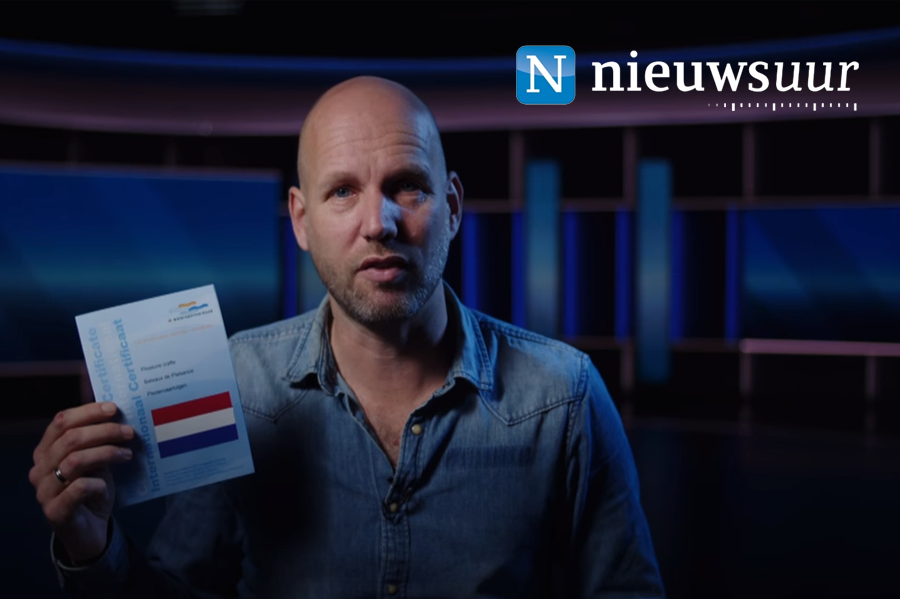 Nieuwsuur, a highly respected news programme on the Dutch public TV network NOS, aired a documentary about the ICP on 28 and 29 October 2020.

The International Certificate of Pleasure Crafts (ICP) is issued by the Koninklijk Nederlands Watersport Verbond (Royal Netherlands Watersportfederation). Together with the Koninklijke Nederlandsche Motorboot Club (Royal Netherlands Motorboat Club, they have been appointed by the Netherlands Ministry of Infrastructure and Water Management to issue and manage ICP registrations. It is the ministry who determines how ICP’s are issued and  what the criteria are to apply for an ICP.

What is an ICP

The ICP is an unofficial document stating the ownership of a vessel. There is one big but, and that is that the document explicitly mentions that the holder may not sail under the Dutch flag and it does not give the vessel the Dutch nationality, as it does with a formal registration in the official ships registrar. In fact a vessel with an ICP is nationless.

In 2019 Portugal banned the ICP altogether and just before the summer months the Guardia di Finanza, an Italian law enforcement agency under the authority of the Minister of Economy and Finance, confiscated a number of boats in Italy that were sailing with an ICP. Not only Italian owned boats with an ICP, but also Dutch owned boats.

Non-Italians with an ICP were chained and forced to register their vessel in an official ships registrar, as nationless boats are not permitted to navigate Italian waters, unless the boats measures less than 10m.

Following the documentary Spain also stated to no longer accept ICP as a form of proving the ownership of a vessel.

Tax evasion and the ICP

The Guardia di Finanza, was keen on checking yachts sailing under the Dutch flag, as Italians with an ICP registered their boat outside of Italy in order to escape from tax obligations. Italians to have had their yacht confiscated and were pressured to either register in Italy or in another official ships registrar, which in all cases is more expensive than an ICP.

Criminal abuse of the ICP

In the month September the Spanish authorities confiscated 35 ton of hasj, which was transported on yachts. Of the five pleasure crafts caught, two had an ICP.  MAOC, a European anti-drug unit based in Portugal, stated that the ICP is being used by criminal organisations to register their yachts in which they transport drugs.

The ICP and non-EU residents

This is not only done with ICP’s but also in official ships registrars. In principle there is nothing wrong with this approach. For example it is not uncommon that an American or Canadian passport holders purchases a yacht in Europe, pay VAT and navigates the Mediterranean during the summer season.

It goes without saying that this construction of setting-up a company and registering the boat under the name of the company can be abused. Just as marrying an EU citizen in order to get a permanent resident permit or to get an EU passport.

Watersportverbond was “accused” for accepting boats registered to a companies owned by non-EU citizens, as if it was a criminal offense, which in facto is not the case if the company or vessel is not used for criminal or shady activities.

Changes may be expected

Without a doubt changes may be expected. During the live broadcast of the documentary, it was reported that possible changes could be that more strict guidelines will be imposed in order to be able to apply for an ICP or possibly that only Dutch citizens and passport holders are eligible for an ICP.  The Watersportverbond already announced that as from 1-1-2021 new application criteria will be put into place.

What was not mentioned in the documentary

A bit of a shame was that no mention was made that the ICP was originally developed for European yacht owner to navigate the internal- and coastal waters of the EU and that it was ratified as such by Austria, Belgium, Croatia, Czech Republic, France, Germany, Hungry, Lithuania, Luxemburg, Romania, Serbia, Slovakia and the United Kingdom.

The ICP is therefore accepted in all these countries and in a number of other European countries accept it, although they have not formalised so as the other states have.

The TV documentary is in Dutch and worth viewing. YouTube does offers subtitling in your own language, just to make your life a bit easier if you do master the Dutch language.