Certificate of Registry, ship station licence, insurance papers, skipper licences — there are a number of documents we keep onboard when sailing. Very often, an ugly plastic Ziplock pouch is used to keep them safe from the elements. But plastic was not always the trend — or even an option!

In the good old days, such documents were kept in a tin or chest, stored and safeguarded in the captains’ quarters. Though not quite as air-tight as a plastic pouch, these vessels did nicely enough when sailing the high seas — or even navigating those winding inland rivers, lakes, and estuaries.

For the better part of multiple millennia, chests were used not only to transport important documents. But also other precious items and cargo. Gifts, gold, and jewels, for example — and, of course, treasure and pirate booty!

If a mariner, sailor, or explorer were lucky enough to harbour such loot, they’d certainly keep it in a chest. Alongside their most essential document, naturally. A very rare and unusual example of just such a chest is this 17th-century piece. Covered in manuscript maps on vellum, it combines the best of both worlds. Acting as a safe place to stash treasure — and, potentially, a treasure map.

It’s suspected that the nautical charts on the chest are from the hand of the owner. Who knows, perhaps this was a form of occupational therapy during long, tedious journeys? Or — as would be typical of the times — a way to map discovered territories for subsequent expeditions. 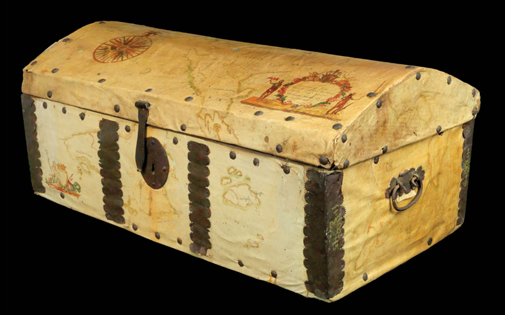 Innovating with the Times

A recent acquisition of a totally different order is afoot in the form of this 19th-century tin box. Considering its materials, size, and shape, it was definitely a vessel in which documents were safeguarded. Given the services offered by Lorrendraaier, it’s easy to imagine that it was impossible to resist purchasing such an item.

Measuring a handy 380 x 150 x 60mm, this captain’s storage tin still has its original padlock. It also bears the name of the captain, M.A. Engelsma, which proves it was personally owned by him. Not simply part of a vessel’s inventory.

Now the question is, of course, who was M.A. Engelsma? Marcus Ales Engelsma (born 1820) was a professional cargo barge skipper from Terherne, the Netherlands. Hailing from a family of skippers, it’s possible he was an influential member of the Terherne Skippers Guild, as well.

Marcus was also the owner and captain of a Tjalk — a Dutch sailing barge equipped with a mast and sails. Dubbed De Jonge Hanna, she was named affectionately after his mother, Hanna Alles Eenshuistra (1782-1853). Marcus not only navigated the inland waters of the Netherlands, but records prove he also delivered cargo to Gent, Belgium.

A possible son, Marcus Ale Engelsma (born 24 January 1842), is also mentioned in a log from the 1900s as a “Bonder” (farmer). Likely a career change, as the word skipper is clearly crossed out below it. Goodness knows, sailing is not for the faint of heart, back, or joint, even on a Tjalk! Another Marcus Engelsma (born 31 October 1888) — likely a grandson — is mentioned in another registry log as a “Zuivelasbieder.” Possibly a dairy provider or worker?

What Did This Storage Tin Hold?

Though certainly not equipped to carry tons of loot, this 19th-century piece is the perfect size for the necessities. Some expected contents — besides documents and maps — would be navigational tools and valuables.

Likely, money, jewellery, photos of family, and passports would be stashed here. Any precious trinkets and knick-knacks picked up while travelling was also sure to find their way here. A useful buy, indeed!

Next mission; to purchase De Jonge Hanna…… if she is still around?