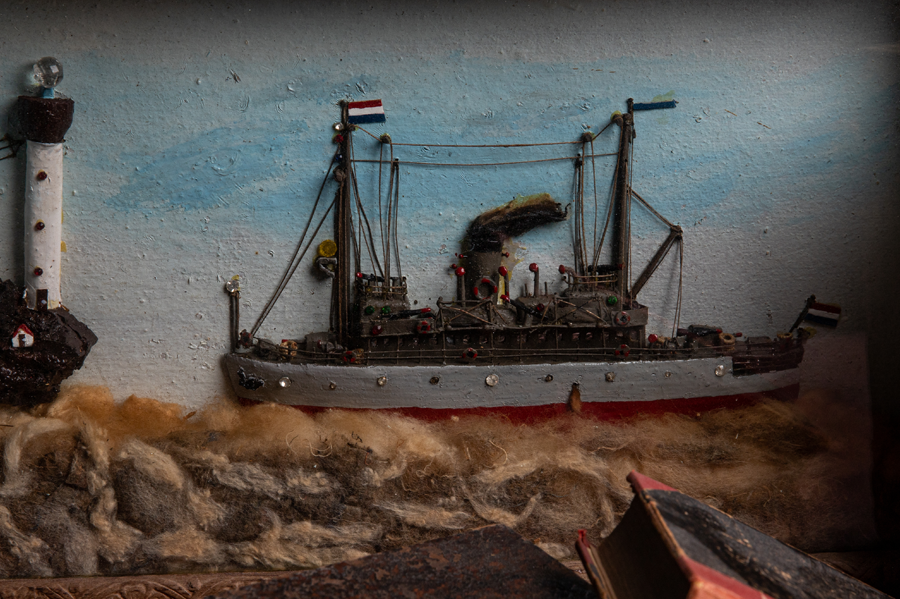 Dating from the late nineteenth to early twentieth century, this charming steamboat diorama caught my eye. An attractive, naïve piece of folk art, I purchased it online for next to nothing.

eBay is the world’s largest second-hand marketplace, right behind Amazon. It also wholly owned and operated the largest online marketplace in the Netherlands — Marktplaats. That is, until 2020 when eBay sold it to the Norwegians.

It was on this very Dutch online marketplace that I purchased my diorama for relatively little money right before the pandemic hit us all. Encapsulated by a hand-carved wooded frame featuring flower motifs, it’s home to a charming, glitzy Dutch steamship.

Sailing in the direction of a rocky formation, this steamship diorama seems a little out of place. Can you tell us why? Yes — the coastline of the Netherlands has few, if any, such rock formations. Outcrops like these are more commonly found in the UK, France, and Spain, not here in the flatlands.

However, this little island does supposedly represent Dutch territory. The Dutch flag is prominently placed on the rock, alongside three cottages and a lighthouse. In fact, all assets herein appear, by a territorial flag, to belong to the low countries — including our steamship.

This piece of folk art was most definitely made in the Netherlands, as its chauvinistic builder placed no less than three Dutch flags within 72cm²!

On the edge of this “Rocky Mountain of the lowlands,” a more familiar sight has been erected. A lighthouse, of which the Netherlands is home to plentiful. Around 20 deactivated or demolished ones, and a further 40 active, by our count.

Including Paard van Marken built in 1839 — which probably bears the closest resemblance, also being placed on an outcrop. Located on Marken island, it actually sits on the site of a more primitive lighthouse dating from the 18th century.

Incidentally, Marken is not far from Lighthouse Island, which also perches on the IJmeer, just closer to Amsterdam’s inlet. Formerly a military base in the 1900s, it too is home to a lighthouse that may likely be the inspiration for our diorama. Now a UNESCO Heritage site, the island is dotted with slope-roofed structures similar to that on our fictitious rock.

Steamships were popular at the time, bussing passengers to as near as London and as far away as the Americas. One such exotic steamboat company was the Royal Netherlands Steamship Company (KNSM). It ran a cargo and passenger service from Holland to South America and the West Indies from the 17th century.

Naturally, its fleet — including the steamships Pomona, Nereus, Euterpe, Danae, and Saturnus — would have been common sights in the IJmeer bay.

On our lighthouse sits the first sign we are dealing with folk art. Its lantern room is a glass or plastic crystal bead. White, red, blue, and green crystals can also be found on the steamship’s hull. Also prominent on its interior, these embellishments depict lighting and windows rather well.

What makes this diorama so charming is that the seas on which it sails are made of untreated sheep’s wool. As is the darker, dyed steam wafting out of the chimney. There’s even a small strand of wool “flowing” from the ship’s hull, depicting the drainage of the water. In those days, they never considered protecting the seas from grey and black water.

[Diorama showcasing a steamship of the coat of the Netherlands]