Legalisation or Apostille of Certificate of Withdrawal? 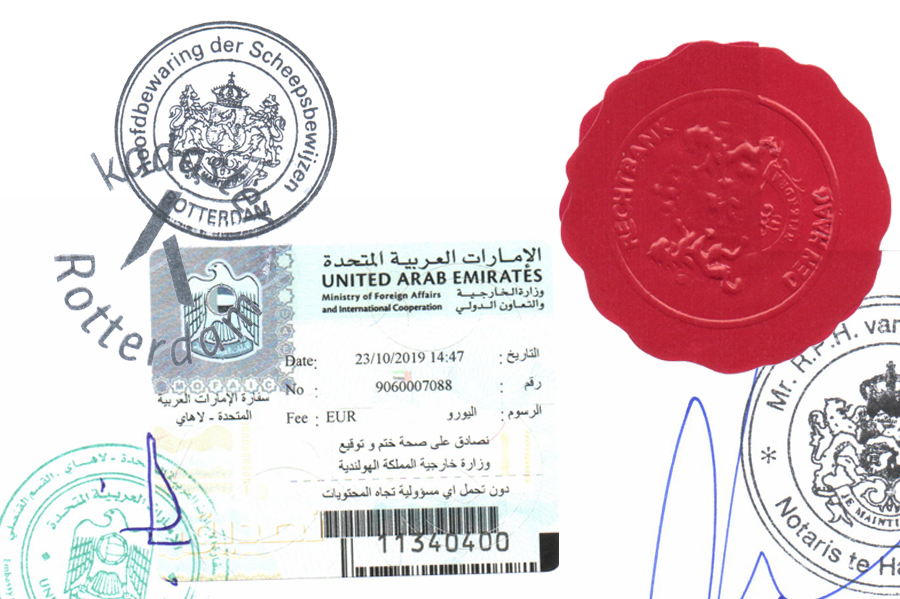 When registering a boat in a ships registrar, one of the requirements is that the application for registration is accompanied by the original Certificate of Withdrawal, in case the vessel was previous registered else ware.

A pleasure craft called Green Egg was purchased in the Netherlands by an American national who lives in Dubai. The American national wants to register his newly acquired sailing monster in the United Arab Emirates because he is stationed there permanently.

The ships registrar in the UAE requires that the Certificate of Withdrawal is legalised, so before registering in the UAE the certificate will have to pass through some hands, being :

Depending on the embassy this whole process can take any ware between a few days to a week and can cost a few hundred to as much as a thousand or more Euros. The costs are for a large part determined by the number of parties that need to legalise signatures and the costs the embassy invoices. Some embassies are reasonable in their fees and others have less favourable charges.

Far more (cost) effective is the Apostille, which just requires the legalisation by a public notary and the courthouse.

An Apostille can however only be issued when the ship registrar is based in a country that participates in the Apostille Convention. From Albania to Zambia, a total of 83 countries accept an Apostille as a legalisation of the Certificate of Withdrawal.

Before requesting the legalisation of your Certificate of Withdrawal :